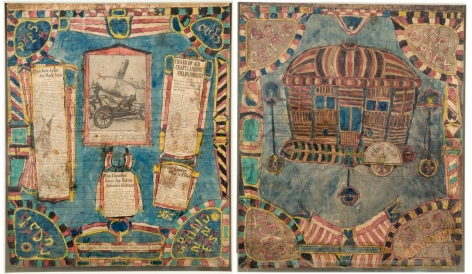 Born in Prussia in 1830, Dellschau worked as a butcher before moving to the United States in 1849, living in Galveston, Texas, Sonora, California, and eventually settled in Houston, Texas. Just before retiring from his work as a salesman in a Houston saddle shop in 1900, Dellschau began work on a memoir recounting what he claimed to be his adventures in California, completing it in 1903. Working alone in a family member's attic, he began work on the first manuscipt of what would be a 12-volume series. Evoking a steam-era adventure aesthetic reminiscent of Jules Verne, this epic narrative follows his alleged adventures as a member of a secret society called the Sonora Aero Club, a group of maverick inventors engaged in designing and flying airships propelled by a mysterious, anti-gravity gas.

Most double-sided pages of Dellschau's manuscripts contain an exquisitely painted airship bounded by patterned framing devices, accompanied by often illegible text and coded messages, and also by collated newspaper clippings providing news of flight technology. Upon flipping through each volume or walking through an exhibition, which presents pages out of context, one is repeatedly confronted with a nostalgic celebration of steam-era adventure and a scathing critique of the destructive use of contemporary flight technology during World War I.

Dellschau's status as one of the preeminent Outsider Artists owes to his entire production, including his use of 19th century literary strategies such as the use of code, which continues to baffle scholars intent on proving the existence of the Dellschau's airships. Houston artist Pete Navarro spent nearly 30 years sleuthing this airship mystery, and has contributed much to our understanding of Dellschau without offering a conclusive claim. Perhaps the answer to this mystery is staring us in the face: the artist often penned the word "Humbug" on his pages. To us, this sounds like a curmudgeoun's epithet, but to the steam-era readers of Edgar Allen Poe's penny paper capers, this word simply meant "hoax."

2002
Eye of the World: Miniature and Microcosm in the Art of the Self Taught, Addison Gallery of American Art, Andover, MA
Visionary Dreamers, Syracuse University, New York, NY

2009
Crenshaw, Dennis, The Secrets of Dellschau: The Sonora Aero Club and the Airships of the 1880s, A True Story, Charlottesville: Anomalist Books, Print, October.