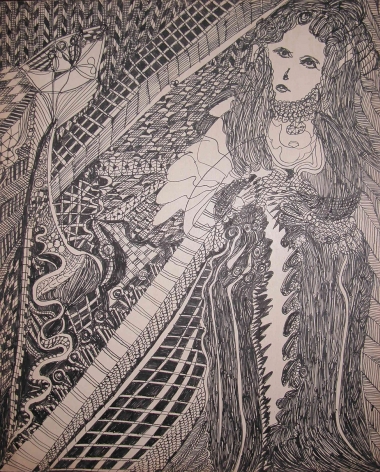 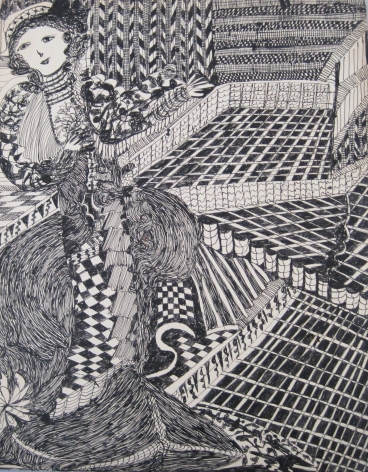 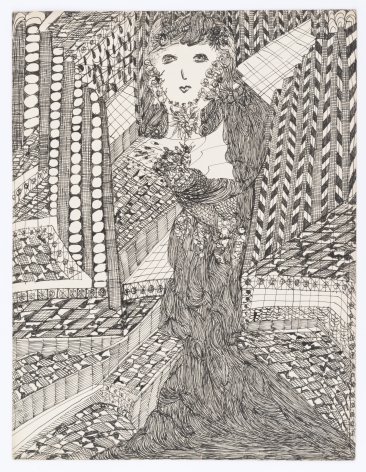 Madge Gill, born Maude Ethel Eades in London, 1882, was an illegitimate child and spent much of her early years in seclusion. At the age of nine she was placed in an orphanage, and at nineteen worked as a nurse and lived with her aunt who introduced her to spiritualism. She married Thomas Gill in 1907 and had three children by him, one of whom died in infancy. Gill herself almost died while giving birth to a fourth, stillborn daughter in 1919, losing the sight in her left eye from the illness that followed. It was in that year, at the age of thirty-seven, that she began to create art in a flurry of drawing activity that was guided by a spirit she called Myrninerest. She often worked on paper or rolled calico, unrolling only a section at a time and not viewing the composition in its entirety. Her drawings, some of which reach lengths of thirty-five feet, include patterns and designs that obsessively cover the surface. The figure of a young woman dressed in flowing robes appears thousands of times in her work, and it is unclear if it is Gill?s spirit guide or perhaps her stillborn daughter. Gill exhibited her work rarely during her lifetime and never sold any of it for fear of angering Myrninerest.

2010
The Museum of Everything, Pinacoteca Giovanni e Marella Agnelli, Turin