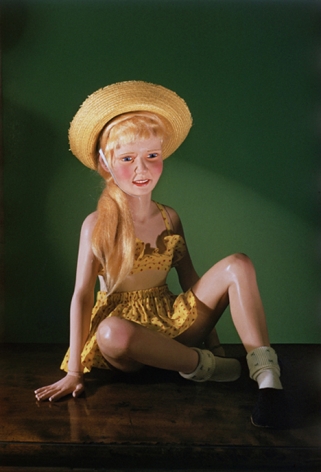 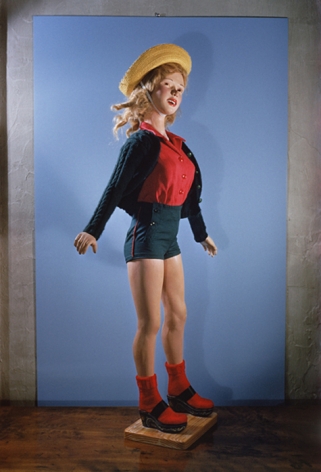 In 1957, Morton Bartlett, writing in the 25th anniversary report of Harvard’s class of 1932, referred to his private hobby as an outlet for urges that do not find expression in other channels.What those urges were, we can only speculate, but the products of that hobby have resonated strongly with viewers since they were discovered at an antiques show in 1993.

Bartlett, who had never married and lived alone, had constructed a family of fifteen anatomically correct dolls, all children: three young boys and twelve prepubescent or physically-developing girls. He then photographed them in varied poses or tableaux, either in clothes he had made or occasionally, in the case of the girls, nude. The dolls are a third to half life size, modeled first in clay, then cast in plaster. Having had no training in art, Bartlett assiduously studied anatomy texts to perfect his creations, then learned to sew, embroider, and knit to clothe them, and finally took up photography to capture the moments of the lives he imagined for them. The well-composed and studiously lit photographs are emotionally charged, alternately sweetly sentimental, poignant, or humorous, and, at times, darkly, even erotically suggestive. They seem to reveal a terribly naked longing that can be unsettling to the viewer, who has gained uninvited access into what appears to be a lonely realm of desire and projection. Bartlett only immersed himself in this realm during the middle years of his life, from age twenty-seven through fifty-four. Having been orphaned and adopted at age eight, he was given good educational opportunities by his new family - schooling at Phillips Exeter Academy followed by two years at Harvard. During the depression and after WWII, Bartlett shifted among a variety of jobs, settling eventually into a career as a freelance graphic designer. He shared knowledge of his hobby with a few neighbors and close friends, and even pondered their commercial possibilities if mass marketed, but never acted. The dolls received public notice only once, in 1962, in a friend’s article about them in Yankee Magazine. But a year later, when Bartlett was forced to move from the apartment in which they had been created, the dolls, photographs, and slides were carefully packed in crates, stored, and possibly not opened until Bartlett’s death nearly thirty years later.

2010
Museum of Everything, London, England and Turin, Italy

2004
Create and Be Recognized, Photography on the Edge, San Fransisco, California and Rochester, New York, NY